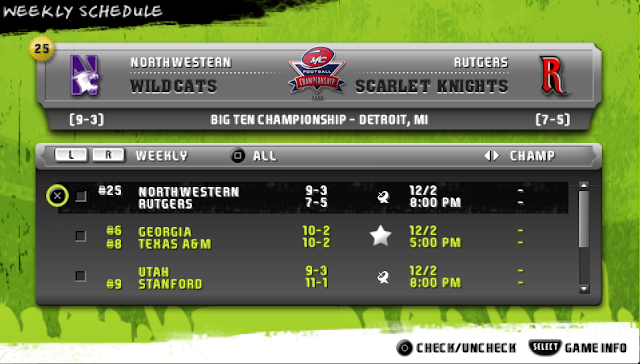 I've recently returned to working on modding NCAA Football 07 on PSP to re-align conferences and sub-divisions again and this time I've taken a different approach. I manually edited every single team's conference and division using DB Editor 3.0. The results are quite promising as you can see in the screenshot above and the video at the end.

The screenshot shows the Big Ten Championship and Pac-12 Championship game that did not exist before, and also shows, coincidentally, three teams that were not in their respective conferences before: Rutgers, Texas A&M, and Utah!

1. This requires hex editing. You'll have to copy/paste a slew of hex over to existing franchise saves. Because this is being worked on in NCAA 07, it'll only work with probably 06, 07, and 08. There's been newer teams incorporated to FBS since then. I am going to look if I can add FCS teams over but I think that requires quite a bit more work since rosters would need to be brought in as well.

2. How they picked teams for the conference title game is a bit mysterious because the teams that were put in it werent necessarily the winners of their respective divisions. Hmmm...

3. Schedule generation does not take into consideration the new conference alignments! I have no idea why either. The game spits out what seems like already built schedules for each season because when I simmed a few different times, I get the same 2nd year schedule no matter what. Hmmm...

4. Because of #3, conference records are all screwed up.