This weekend will see another set of new features for the Android edition of College Football Coach: Career Edition, which is available on the Google Play Store for free!
I've been working on some popular new features that have been requested for months.
Firstly, I have several bug fixes that should help stabilize the game, as well as a lot of additional code optimization to help with memory and game speed.
Now, I have been working on the Expanded College Football Playoffs. This new mode will completely replace the Bowl Games and will take 16 teams to a playoff system after the Conference Championships. It's very important that you win the Conf Title, as it'll guarantee admission to the 16-team playoff. The other 6 at-large bids will be taken with the next 6 best seeded teams that did not win their conference title, so more than likely, these will go to the Power Conference teams.
With this new change, I've also made a small tweak to the Calendar. There is now 25 full weeks of simming now in the game, as I've broken the Bowls to a month of football. This also coincides with the needed weeks to make the playoff system work. I have yet to, but I will factor in injury healing into this time period. 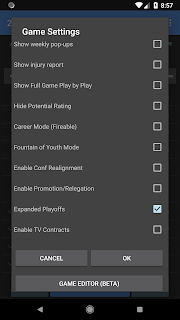 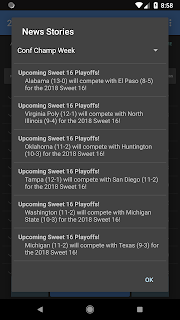 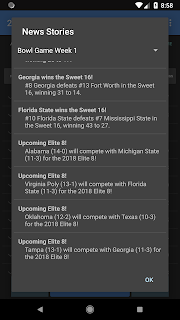 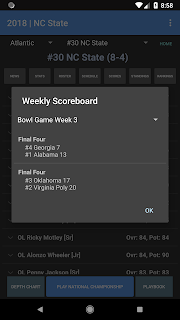 Another new feature I've added is broken down to a few layers as well. First, I've gone back and added every state in a possible player home state now. That means, I had to also assign each state a specific ID that made their "region" still work well for recruiting in it's current state. All of this happens under the table, but if you look at each player profile and recruiting profile, you should now see a State Abbreviation instead of a region now. 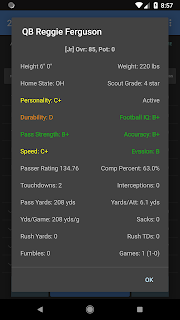 I've also re-ordered the Player Card layout a little bit and will continue to make it more user-friendly.
As Achi Jones continues to get closer to releasing Football Coach 2, I may start to wind down development on this game for now. Most of my new features will be making the game experience more user-defined and editable. I want to expand the game editor or import/export tools some more so that if and when I stop developing this game, the game can continue with the users' creativity.
After the new game is released, I may sit back and see where this game belongs still in this space. I am looking forward to his new game and hopefully he will take some of the best parts of this open-source title and make it his own.