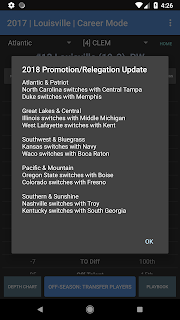 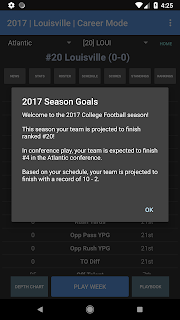 I released a big update yesterday after sitting down listening to music and having a free friday evening. I squashed several bugs that people posted such as various text errors, team highlighting and a game sim error (using the wrong playbook!)
Mid-Season Player Progression
This new feature lets players who have been playing either as a starter or a sub to increase some of their stats during the course of the season. At week 6, the progress is calculated and the new overall for players who have seen enough change in their abilities to push their overall up are displayed in both a pop-up and a new icon next to their name in the roster page for a couple weeks. 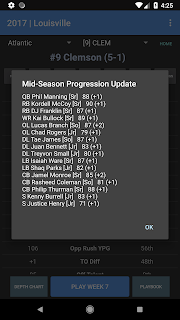 UI Enhancements
After the season is over, I had disabled many of the buttons. These are all re-enabled now.
Roster Page: The roster page will now display your team's roster for getting ready for the draft. After graduation, your player's new ratings will be shown with a (+X) icon next to the overall rating to see the change in overall score. You will also be able to see transfer players when that phase is over.
Depth Chart: The depth chart has been re-enabled. As a reminder, it is probably a good idea to update your depth chart if you want to start a younger, lower overall player before Transfer phase. If they are not set as a starter, they may decide to transfer from you!
Various others: The Conference Standings now show Poll rank for the Top 25 teams next to the team name. Various fixes have been made to news articles, awards displays, and other tables. 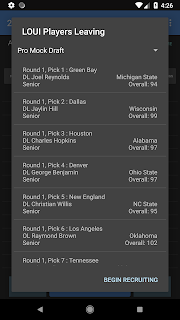 Prestige System Changes
The prestige system has been overhauled. Right off the bat, you will notice that you now have a pop-up at the beginning of each season letting you know how the media projects you to finish during the season as well as setting goals for your year. Prestige is calculated partially based on these expectations. I’ve been continuing to tweak the new system a bit to balance the teams more!

Coach Hiring/Firing System
This has also seen some significant changes lately. The biggest addition besides various tweaks for formulas, is to new coaching free agent pool. Each year, coaches that get fired get dumped into a pool for re-hire. In the past, these coaches go extinct if they don’t get rehired immediately. The new system allows these coaches to be kept until they turn 58 years old. In addition, each year they may learn a little bit more and may become better coaches than previously. I have also let them keep their old stats and coach history. Hopefully it all works out!
CPU Redshirts/Transfers/Early Draft Consideration
I’ve tweaked this area a bit over the past week. The redshirting formula has been changed for CPU teams so teams can redshirt more if they want depending on the coach’s talent rating. The transfer system has been tweaked very slightly to allow sophomores to transfer and even freshman if they are a QB though its very rare. Finally, sophomores can now enter the Pro Draft but its very rare. They have to be a 92-overall rating to even qualify for this which does not occur too often. 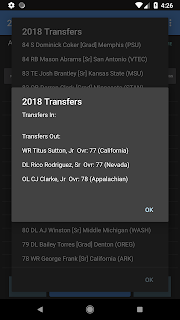 Conference Realignment & Conference Promotion/Relegation
This is a fun new one you can find in the Options menu. You can only pick one of the options, or none. Realignment is on by default. Obviously, if you pick neither of them, the game will play with the same Conference/Team structure forever.
If you choose Conference Realignment, every 5 years, there’s a possibility that one of the first 5 conferences may decide to add the best teams from the other 5 conferences. If all criteria are met, then there is a possible chance that they will swap teams. It’s not too often this occurs but does throw a little unpredictability to the game!
If you choose Promotion/Relegation, you will be in a universe that is in constant change! This mimics the soccer world, where the top two teams of each Group of 5 conference will get promoted to the Power 5, and the bottom P5 schools will drop down. This happens every season!
For both cases, teams will keep their rival teams. In addition, they will have the same trading partner each year. This is basically Conference 1 and 6, 2 and 7, 3 and 8, 4 and 9 and 5 and 10. By default, that means: Atlantic – Patriot, Great Lakes – Central, Southwest – Bluegrass, Pacific – Mountain, Southern – Sunshine. 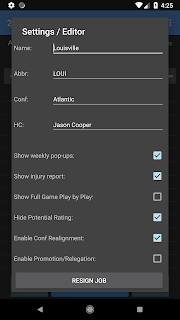 Potential Ratings Display Changes
This was implemented a little bit ago, but just to share the idea behind it – The potential rating made the game way too easy in my opinion. You would know who to start just by looking at it. So I disabled it by default. If you want to play with it on, then you can enable it in the Settings menu.
But I’ve also tweaked how it displays. For the Roster display, the potential rating is now longer displayed as the players actual potential rating (A+ through F). Instead, it displays the players scout rated ceiling (i.e. 98 overall rating by his senior year). This display is just a best guess based on the team talent department of what they expect the player to be like in the future. This mimics how “potential” is displayed in games like Out of the Park Baseball and Front Office Football.
Recruiting Changes
In addition, recruiting does not display Potential rating anymore. This also made it too easy to recruit! Instead, it will display a Scout Grade that factors in the players current abilities and potential. So, you wont know exactly what you’ll get until he’s with your team.
Finally, there’s been several tweaks with allotted budget for recruiting to balance it out a little more. I am pondering ideas how to revise the recruiting changes to more closely align with what is being done with iOS but I also have some reservation about it too. I may add in some scouting functions first and see how I like it. But these are just ideas for now. 😊
Challenge Mode
Challenge mode has gotten a re-write. This mode now lets you start with the Bottom 3 teams of any conference, based on a algorithm using the team's talent ratings and their prestige. This creates a big challenge since the teams are expected to perform poorly and you need to bring them up! This is a start of something I have possibly brewing in v1.2.x of the game. But I'm trying to learn how to use the Google Play Games APIs for what I want to achieve. (hint: leaderboards)