May 17, 2016
Update: SUCCESS!!! See the video above! Follow the log below ;)
Finding that 2K13 Roster for PSP the other day got my head churning a bit. I had been trying to look into modding NBA2K13 for PSP for a while but the task seemed more daunting than EA Sports. 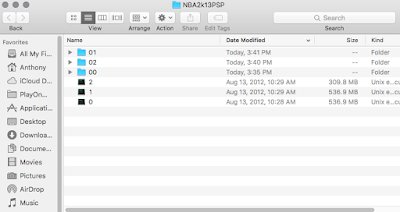 As you can see in the screenshot above, the NBA2K UMD only has 3 data files in it, and it's titled 1, 2, 3. Not very descriptive. Obviously they are compressed packages, but finding something to uncompress it wasn't easy.
Thankfully, I found Game Extractor by Watto Studios, and this was able to successfully open the file. Unfortunately, as expected, the package opened up hundreds of smaller files that were also named 0,1,2 etc. So again, not very descriptive.
Reading these files in a hex editor determined that there's a ton of texture (TXTR) files, scene files (SCNE), and something called CSRS files among other things. I took a saved roster file and looked at the file size of it ~800kbs and started sorting and screening through files that fit this size.
I quickly found file 005152 in the "0" compressed package. This had the ROST header in it! Yay!
Now... hopefully the fun begins. 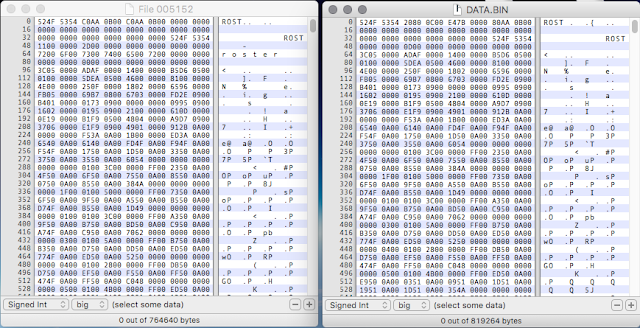 Why am I so interested in this?
Well because NBA2K China is stupid. They let you modify rosters (sorta) but when you start a season or association or any of the modes outside of Quick Play, it automatically loads the default rosters! So what's the point of editing? :(
This seems like it's only an issue with the PSP version, as the PS2, PS3/360, PS4/XBone versions don't have this quirk.
Anyway, I'm hoping to sub this updated roster with this one in the archive and see if I can get it things rolling... it'll take some editing though, since the files don't match up completely.

Modifying the compressed archive wasn't an option in Watto for this specific file unfortunately. I had to dig a bit deeper. I found the offset to where the "ROST" began and then copied and pasted over that section of the "0" archive file. I then re-made the UMD image with this modified "0" file and just for fun, I made new icons and background for the PSP menu and... voila! It works!