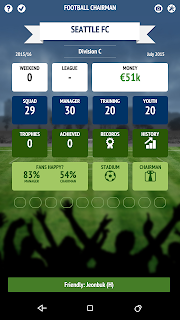 Football Chairman is one of the most addicting easy to pickup sports management games for mobile devices. I've been playing it since the Lite version came out a couple years ago and just recently got back into it with the premium Pro version.

In this game, you are the owner of a club and are trying to take your team through seven divisions of association football while managing money, stadium,  concessions, staff and coaches and of course players. It's a fun challenge and one of the cool parts of the new pro edition is the ability to use custom leagues.

I created a couple ones recently that I can share with you all, below.

ID 213134
English Football Association
This pack is just a name for of the existing default data the game comes with. It fixes a few team names, league names, cup and trophies, and makes Leicester a bit better than where they are by default.

ID 213340
Club Championship
This pack modifies an existing user made package which takes the top clubs in the world and dumps it in a 7 division association. I've modified several teams, added some MLS clubs and renamed all the cups.

USA CONCACAF
this league will have every US soccer league and teams in it and european tournaments will be replaced with CONCACAF Gold Cup and its clubs.

NCAA Soccer
this pack will feature the top Division 1 soccer schools. Continental tournaments will be against MLS, NASL and USL teams.