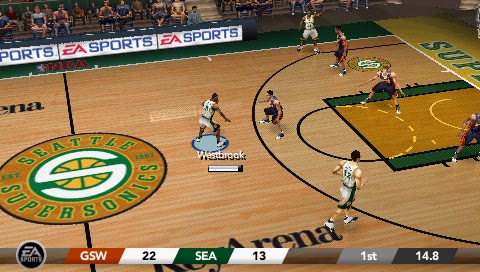 The Sonics leaving Seattle is a sore subject for many folks around here including myself. It's been increasingly frustrating to get your hopes back up and then thrown to the curb again and again.

I've been trying to figure out how to update some old PSP NBA Live games to be the Super Sonics once again. This photo here represents the Seattle Sonics in NBA Live 08. Yes, the game is the last one on PSP to include the Seattle franchise, however, I imported rosters from the NBA Live 10 series over, which was the last one from EA Sports on this console. So, my Sonics have Westbrook and Harden, and whoever else joined post-doom+gloom-era.

It wasn't too difficult, as EA Sports is really lazy and didn't even change Seattle named files out of the database. The content was different, but the file names were exactly the same. I just had to make sure what worked and what didn't. So while the above screenshot is basically just extracting the default team rosters and attribute files out of NBA 10 into NBA 08 -- You can actually import Sonics graphics files into NBA 10 from 08 as well.

I was successful in importing the Sonics uniforms and changed the team name/arena name over to Seattle from OKC. I'm still working on getting Key Arena in there and changing the menu logos from the Thunder brand to the Sonics brand though.

As far as Roster Editing -- it's really limited right now. You can't create players in the game, and there's no pre-made editor. The NBA Live PC series has extensive editors but they use a dbf format while the console versions use a dbc format. It looks like graphics are using the same MSH format used in other EA PSP games, different than the FSH/XSH/DAT format from the PC counterparts as well. Audio is the same though! It uses ASF sound files embedded in the BIG and VIV files.